This recipe is adapted from Smitten Kitchen. It is a great blog with beautiful photos. The original recipe can be found here. I made it with sweet potato fries (Ore Ida) which were very good. Healthy, too, because they are sweet potatoes….right? This was a hearty meal and we were both left feeling extremely full. I would typically use ground turkey in a recipe like this, but I decided to try ground chicken instead. This decision was made mostly because we are probably having turkey two other nights this week (tacos and turkey italian sausage), and you are what you eat and I don’t want to turn into Thanksgiving dinner!

Meatballs
The baguettes or seeded sandwich rolls you’ll use for your sandwiches
2 pound ground meat of your choice (I used chicken–1lb only)
2 tablespoons chopped parsley (I used dried-~1tsp)
1/3 cup finely grated Parmesan or Romano cheese (WHOOPS! I forgot this. This explains some of the problems I had. Haha, oh boy, my dad would tell me that I had a “blonde moment.”)
3/4 teaspoon salt (I just threw some in)
Pinch of red pepper flakes (used cayenne instead, didn’t have flakes)
2 small garlic cloves, minced (skipped, for hubby)
1 teaspoon onion powder (I used grated onion)
1 teaspoon Worcestershire sauce (Again, just threw a bit in)
1 large egg
Olive oil
4 cups prepared tomato sauce(I used pizza sauce)

Assembly
2 cups coarsely shredded Gruyère (I used mozzarella and not nearly 2 cups–this is all about how much cheese you like. I could put a whole two cups on my sub alone, but like I’ve said before, I’m trying to lose baby weight!)

Make the meatballs: Split your rolls almost the whole way through, leaving one side attached. Scoop out some of the roll to create a channel for the meatballs to rest in (I used a combo of a grapefruit spoon and my fingers). Grind the bread you pulled out in a food processor or tear it into minuscule bits (I went the food processor route). You will need 1 1/3 cups or 2 3/4 ounces of fresh breadcrumbs for the meatballs (I used less, since I only had 1lb of meat). Set rolls aside until later.
Place the fresh breadcrumbs in a large bowl with 3/4 cup warm water (I used less, less meat) and all of the meatball ingredients except for the olive oil and tomato sauce. Combine with a fork, breaking up clumps of meat until the ingredients are evenly distributed. Form mixture into 2-inch meatballs are arrange on a tray. I find wet hands make it easier to form meatballs without them sticking too much. (My meatballs were really loose so I didn’t really need to wet my hands)
Heat a generous slick of oil (few tablespoons) in a large saute pan with a lid. Brown meatballs in batches, being careful not to crowd the pan or nudge them before they are nicely browned or they will stick and you’ll leave delicious meatball bits in the pan. These meatballs are soft, so use a gentle hand. Transfer meatballs to a paper towel-lined tray and continue until they are all browned.
Discard the oil and heat your tomato sauce in the pan. Add the meatballs, cover the pan and simmer them on the lowest heat possible for 25 to 30 minutes, until the meatballs are cooked through.
Caramelize onions: While the meatballs are simmering, you can cook the onions. Heat the olive oil and butter in a heavy large skillet over medium-low heat. Add onion, sprinkle with salt and a little pepper and cook until they’re tender, sweet, and a deep golden brown, stirring occasionally. This takes me about 30 minutes.
Sauté Mushrooms: Sauté mushrooms in skillet until browned and cooked through. I used the same pan as the onions so I didn’t add any oil or butter.
Assemble subs: Arrange meatballs with sauce in the hollowed-out roll(s). Drape caramelized onions over the top and sprinkle with shredded cheese. Place subs under a broiler or in an oven at top heat to melt the cheese.

Verdict: So good. Extremely filling. Ours were messy and required a fork. This was partly due to the type of bread I had, it was a soft french bread.
Husband’s take: He loved it, but really, what man wouldn’t? It is a meatball sub. He was skeptical of the chicken versus turkey decision–I have turned him into a ground turkey lover–but after eating it, he said he “Wouldn’t want it any other way.”

Changes I would make: Well, for starters, I would read the recipe and put cheese in the meatballs. In all reality though, even though the meatballs were super soft, it was really good still.
Difficulty: Moderate. The only reason it isn’t easy is because there is a fair amount of time involved. 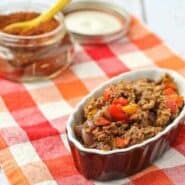 Pasta with Pancetta in a Smoky Tomato Sauce 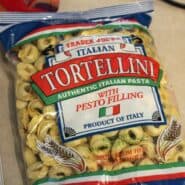