END_OF_DOCUMENT_TOKEN_TO_BE_REPLACED

Shake up a perfectly chilled spiced apple cider mocktail at your next fall party! It can easily be made into a cocktail too.

Why you’ll love it: This no-alcohol martini is festive and exciting.

How long it takes: Prep the cinnamon ginger simple syrup ahead; the cocktail can be made in less than 5 minutes.
Equipment you’ll need: cocktail shaker, ice, martini or stemmed glass
Servings: 1

Do you enjoy a good cocktail but don’t want the alcohol? Mocktails are the answer to this dilemma. With the same elements of a cocktail – complex flavors, fancy glassware and garnishes, and mixology recipes – you won’t miss the spirits.

I love this fun apple cider mocktail. It’s refreshing, festive, and easy to make, with notes of cinnamon and ginger to add complexity. And if you’re looking for a cocktail, go ahead and add vodka, rum, or bourbon.

Not into pumpkin? Crisp crostini are always a hit at parties, too. Try roasted grape crostini with ricotta and honey, wild mushroom crostini with goat cheese, or butternut squash crostini with ricotta. Bowls of nuts like spiced pecans or cinnamon roasted almonds will disappear quickly. Homemade gingersnap cookies with white chocolate and cranberries are a good match, too.

For dinner, these grilled pork kabobs with apples are so good. Serve the kabobs with autumn quinoa salad dressed with a fabulous maple mustard vinaigrette, and of course, an apple cider mocktail.

About this Apple Cider cocktail

This apple cider mocktail (or fake-tini) is super easy to make. You’ll want to prep the spice-infused simple syrup ahead of time so it’s chilled and ready to go. The mocktail takes about five seconds to make, okay, maybe ten.

I’ll get you started here with a few tips and extra information.

You’ll find the printable recipe card with complete instructions and nutrition information at the end of the post.

How To Make It

Begin by making cinnamon ginger simple syrup. Simple syrups add so much flavor and keep several days in the fridge. There are so many ways to infuse flavor into this mixer.

Combine water and sugar in a saucepan, along with a couple of cinnamon sticks and sliced fresh ginger root.

Simmer until the sugar is completely dissolved. Let the syrup cool with the cinnamon and ginger in it. It will infuse the syrup with so much flavor.

After the syrup has cooled, strain out the cinnamon sticks and ginger. You’ll have plenty of cinnamon ginger simple syrup for several drinks.

Since this mocktail is chilled briefly in a cocktail shaker with ice but not served over ice, make sure your ingredients are well-chilled. Serve the drink in a stemmed glass so it isn’t warmed by body heat.

Prepare your glasses by wetting the edge with cider and dipping them into cinnamon sugar. Thinly slice an apple for a garnish.

When you’re ready to serve the mocktails, add a couple of tablespoons (or to taste) of the simple syrup, apple cider and ice to a cocktail shaker. Shake vigorously until the drink is chilled, and pour it into your prepared glass.

So delicious and pretty too!

Psst: If you want, add a shot of vodka, whiskey, or spiced rum. Or try this fantastic Apple Cider Mule, with ginger beer, apple cider, and vodka. An Orange Gin & Tonic with Cinnamon is outstanding, too! Or, if you’re a bourbon fan, try a Maple Old Fashioned.

This is a tricky question. If you live in the U.S., cider refers to a non-alcoholic, unfiltered, unsweetened apple juice beverage. It’s simply juice squeezed out of ripe apples and it isn’t fermented. However, if you live in other parts of the world, cider refers to a fermented product that contains alcohol, up to 12%.. In the U.S., this alcoholic beverage is usually called “hard cider.”
Note: The recipe for this apple cider mocktail uses non-fermented cider, with no alcohol.

What makes a good mocktail?

There are a few things to look for. Does it have interesting ingredients with complex flavors? Were mixology techniques used in the preparation? Is it presented beautifully? Notice cocktail glasses, garnishes and embellishments.
A mocktail should have the same elements as a good cocktail, without the alcohol.

What kind of alcohol goes best with apple cider?

Since apple cider is full-flavored and quite sweet, we like bourbon, rum, or spiced rum. Add cinnamon-flavored whiskey such as Fireball or Tennessee Fire to either cold or warm apple cider for an easy fall cocktail. If you really want the apple cider to be the star, add vodka.

Here’s just a few ideas for you:

To get a head start on this recipe, prepare the simple syrup up to a week ahead. Pour it into a jar with a lid and store it in the fridge. Cinnamon sugar for the rims can be made anytime.

Make sure you have plenty of fresh ice on hand and your glasses are sparkling clean.

Prevent your screen from going dark
Shake up a perfectly chilled spiced apple cider mocktail at your next fall party! It can easily be made into a cocktail too.

For the Simple Syrup: 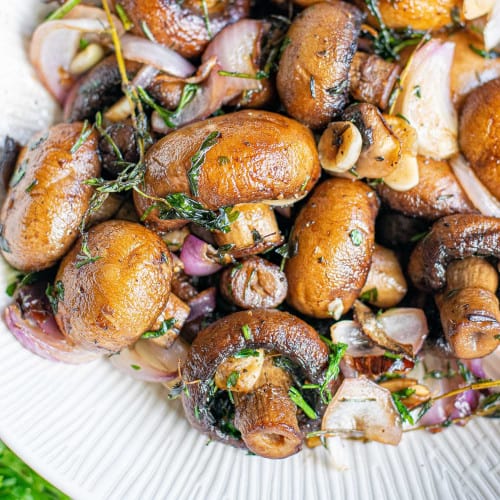 Next Post
Air Fryer Mushrooms with Garlic and Shallots