I’m on a panini kick. I’m not so sure that my husband is too fond of this. He would rather not have a sandwich for dinner. He would never complain, but I can tell. He loved the Cuban panini, but I don’t think I have him converted yet.

This is a really easy recipe. In fact, I’m not really sure it is a recipe so much as it is an idea. There are a lot of possible variations here. These were the players in our paninis. (I just looked up “panini” and found that actually “panino” is singular and “panini” is plural….but Wikipedia says Americans call more than one panini “paninis,” so I guess I’ll stick with that).

bread
mozzarella cheese
Parmesan cheese
hard salami
pepperoni
ham (only a very, very little–I was finishing off what we had)
turkey
spinach
sauteed mushrooms
almost caramelized onions (I had to nurse my daughter and couldn’t give them any more time)
pizza sauce

Directions: Assemble sandwich, spray the outside of both slices of bread with non-stick spray (again, use butter if you’re feeling crazy), and grill. I pressed mine down a little. Not too hard though–this was one hefty sandwich and I didn’t want to lose all the mushrooms.

The pictures are of my husband’s sandwich. Mine had slightly less meat on it. You could use whatever meat you like. I’d say that you would want to include pepperoni to make it really taste like pizza, but you wouldn’t have to. You could put on chicken, roast beef, whatever! You could also throw on some peppers (roasted red peppers would be great), some extra spinach and mushrooms and make it a vegetarian sandwich. It would be great that way too. 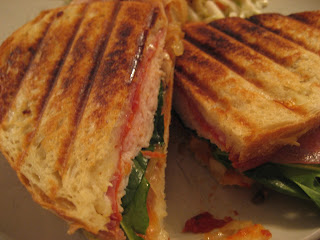 Verdict: Very tasty. I liked this better than the Cuban panini (panino?). Although, that one was really good too. The sauteed onions and mushrooms put this one a step ahead for me.
Husband’s take: “It tastes like pizza.” He liked it but preferred the Cuban panini.
Changes I would make: None necessarily, but there are so many different things you could do with this.
Difficulty: Easy.