As I’ve mentioned before, I’m not a fan of having the same meal two nights in a row. This doesn’t not mean that I am not a fan of leftovers. I just like to make a new creation out of them. I get bored easily. With Cuban pork, the question of what to do with the leftovers was a no-brainer. Cuban sandwiches! And let me tell you, these sandwiches are THE reason to make this pork.

Cuban Panini
Cuban pulled pork (with onions mixed in)
sliced deli ham
dill pickles
dijon mustard
mayo (if desired)
cheese of your choice–I used sharp cheddar because it is what we had.
your favorite kind of bread (I almost forgot to write this. It is kind of important.)
Instructions are easy: Make sandwich. I put mayo and mustard on both sides (no mayo for hubby), then pork, pickles, ham, cheese. In that order. Makes sense to me. If you like cheese melting on your pickles, put those two next to each other. If you like it cheesy, put cheese next to both pieces of bread. Or whatever. You don’t need me to tell you how to make a sandwich.
If you want it to be really good, spread the outside of each slice of bread with butter before grilling. I sprayed each side with non-stick spray because I’m watching the calories. Honestly, it is crispy and delicious and doesn’t make your fingers greasy. If I wasn’t in love with butter, I wouldn’t know what I was missing.
I grilled mine in my George Foreman grill. I pressed it down really hard a few times–because that’s one of the things that makes a Cuban sandwich a Cuban sandwich, right? Just don’t burn your fingers. Grill until golden brown and cheese is melted. 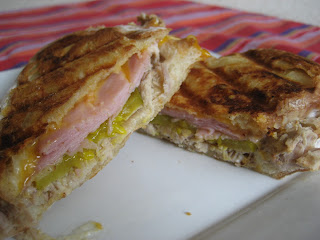 Verdict: Oh my. This was really good. I’m not going to lie, I had it for lunch and dinner. I’ll probably be three times my size tomorrow because of all the sodium (pickles, deli meat…oh boy).
Husband’s take: Loved it. He always gets the Cuban panini from Panera. He liked this one better. A lot better. He said, “It doesn’t have that weird chipotle mayonnaise on it, and it isn’t so greasy.” No offense Panera….we love you!
Changes: None. I don’t even know what kind of bread this was (from Kroger’s bakery), but it was perfect.
Difficulty: So easy.
Sandwiches, Burgers, Wraps, & Tacos