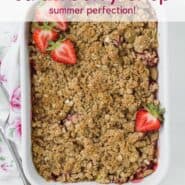 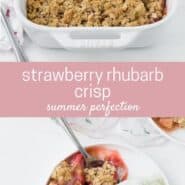 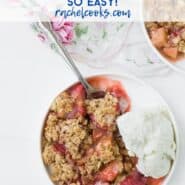 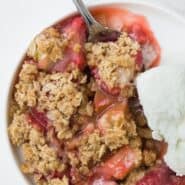 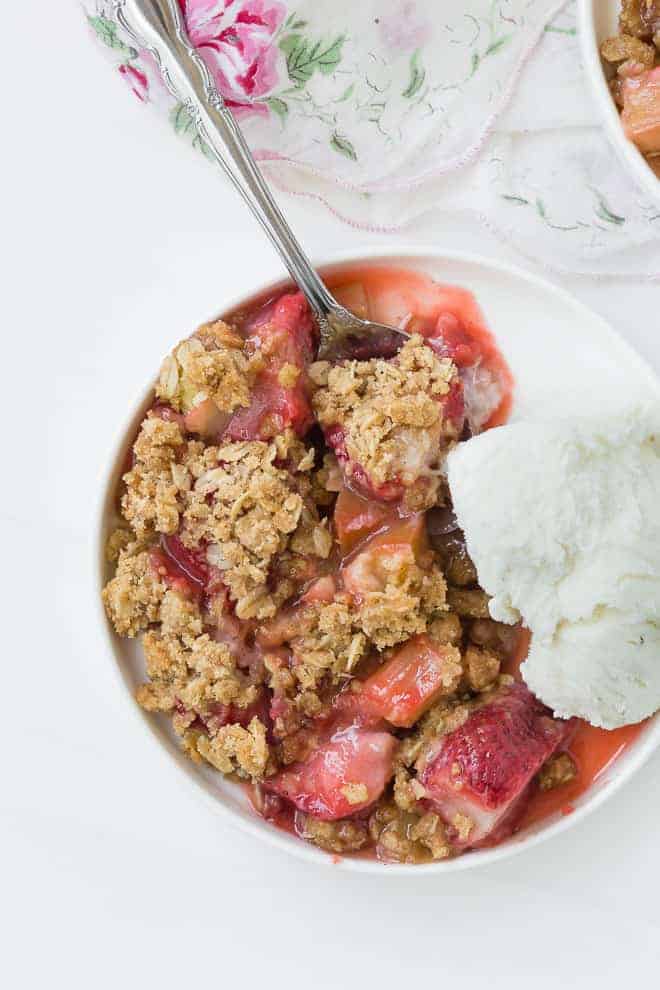 Just when we think winter is going to last forever, the snow melts, the ground warms up a bit, and the pink knobs of rhubarb emerge. The stalks grow so rapidly, you can almost see the change overnight. Stretching toward the sun from that pink knob, long stalks with gigantic leaves beg to be harvested.

What to cook with this rather unique sour vegetable? Why, strawberry rhubarb crisp, of course! Sweet, juicy strawberries, another early summer crop, are a perfect match for rhubarb. Topped with a crunchy brown sugar and cinnamon crumble, this fruit dessert is a taste of summer.

A fruit crisp is undoubtedly my favorite dessert to make. It isn’t a fussy dessert. Who has time to mess around with pie crusts? Pile fruit in a baking dish, sprinkle on the topping, and bake. It doesn’t get much easier than that. And the result? Well, give this strawberry rhubarb crisp a try and you tell me!

You’ll want to make blueberry crisp later in the summer when blueberries ripen, or maybe peach blueberry crisp, and don’t forget apple crisp in the fall! But right now, enjoy the first fruits of summer with scrumptious strawberry rhubarb crisp. Make sure to eat a piece while it’s still warm with a big scoop of vanilla ice cream. Mmmmm, so good! 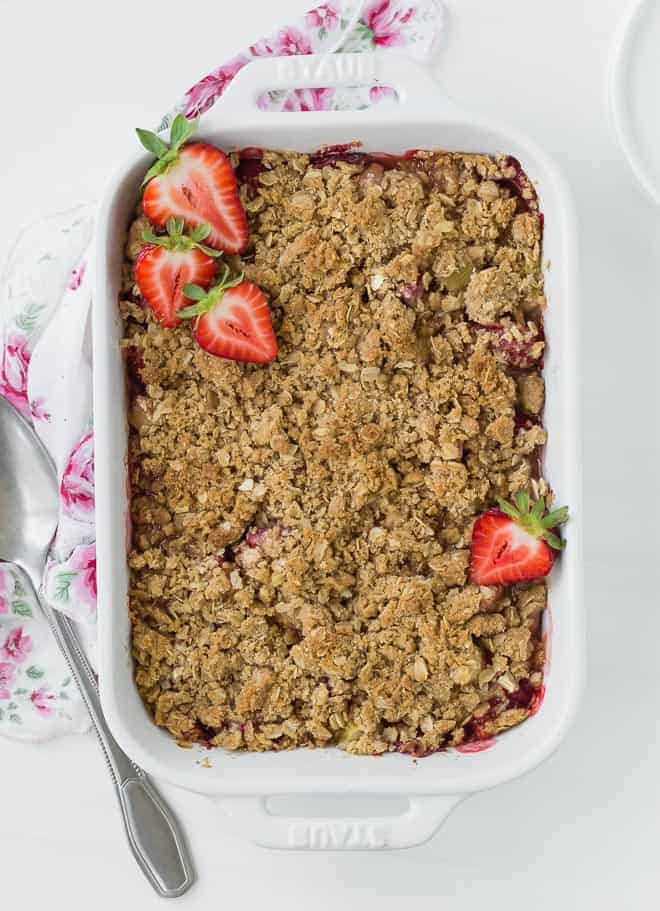 About this strawberry rhubarb crisp:

My mom dropped off a big bag of rhubarb stalks from her garden the other day. Yaaay! Love you, mom! I thought of making a batch of rhubarb cardamom shortbread bars because they’re so dang good but I’ve been craving a fruit crisp lately. So here we go…

Fruit crisp recipes are easy to make. You don’t need any special equipment, just a baking pan and an oven.

Prepare the fruit. If your rhubarb still has the leaves attached, cut them off and discard them. They contain a poisonous substance called oxalic acid so don’t be tempted to make a salad out of them.

Wash the stalks thoroughly and chop them into half inch pieces. With a good sharp knife and cutting board, chopping rhubarb is actually kind of satisfying. Try it — you’ll see what I’m talking about…kind of like celery.

Wash and hull the strawberries. If they’re large, you’ll want to cut them in half, or maybe even quarters. Mix the fruit in a large bowl with flour, sugar, and a pinch of salt. Since rhubarb is very juicy, you need a little flour to thicken the juices. Scrape the fruit mixture from the bowl into a baking dish.

You can use the same bowl to prepare the topping. Mix flour, oats, brown sugar, cinnamon, cardamom, and nutmeg, and then add a chunk of butter. Blend the ingredients together with a fork, a pastry cutter, or your fingers. Like I said, this isn’t a fussy dessert. Once the mixture holds together, sprinkle it by handfuls on top of the fruit mixture. If you like big crunchy chunks, squeeze some of the topping into larger sized lumps.

Pop your fruit crisp in the oven and bake it until it’s all bubbly and browned. It smells so heavenly while it’s baking that it’s almost worth making just for the smell!

Cool briefly, and enjoy with a scoop of ice cream! 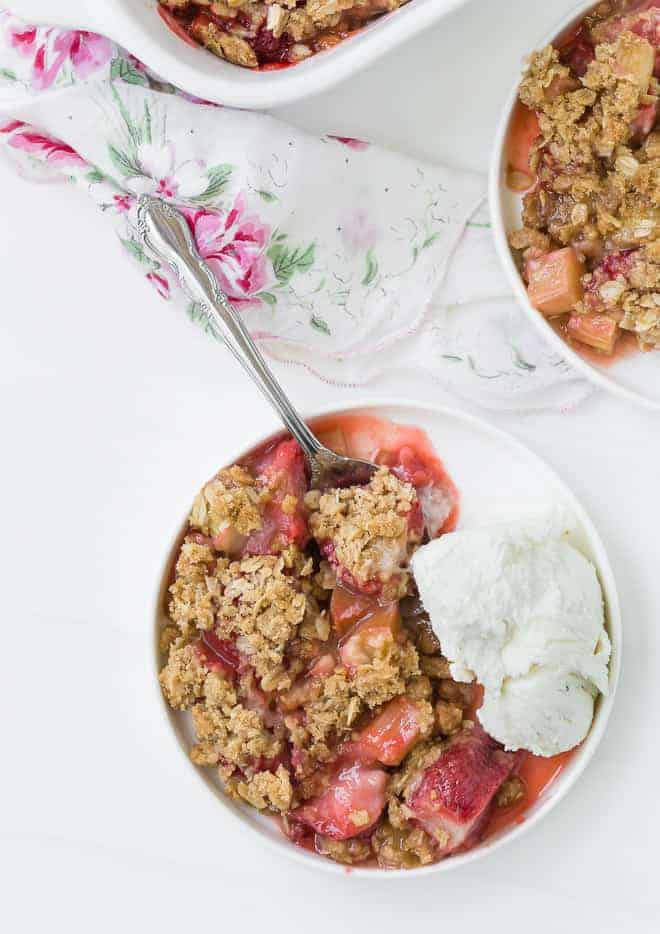 How to make this crisp your own:

Fruit crisps are pretty forgiving. Use what you have in your pantry and fridge to make your own special dessert. By the way, you may also know them as a “crumble.” Pretty much the same thing except crumbles usually don’t have oats or nuts. 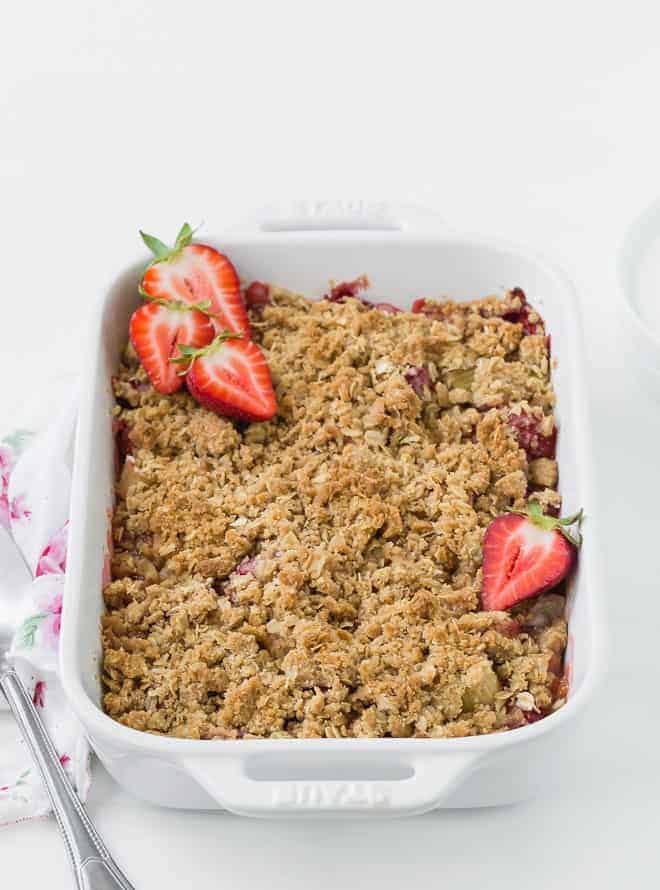 Fruit crisps are best served the same day you make them. If you happen to have leftover rhubarb crisp, cover it and save it for later.

It doesn’t really need to be refrigerated if you plan on eating it the next day. If it’s going to be longer than that, I’d recommend refrigerating it. The topping won’t be as crisp but it’ll still taste really good.

I like leftover fruit crisp for breakfast with a big dollop of plain Greek yogurt!

One of the many reasons I like fruit crisps is that they are mostly fruit. And fruit is healthy, right? Here’s a few more of my favorite fruit desserts:

Verdict: Love, love fruit crisps and this one is no exception. I love how the tart rhubarb pairs with the sweet strawberries.
Husband’s take: Ben isn’t a huge rhubarb fan, but somehow this still manages to disappear around him.
Changes I would make: None!
Difficulty: Easy!
Desserts Summer 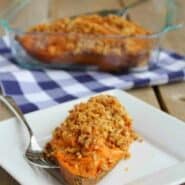 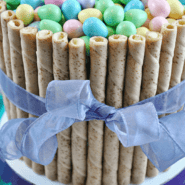 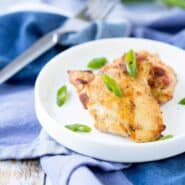