One of my friends made this recipe and posted about it on facebook. I love Cuban sandwiches so I thought if nothing else, I would have a good use for the leftovers! The original recipe can be found here.

1/4 cup lime juice
1/4 cup water
1/4 cup grapefruit juice
1/4 cup orange juice (original recipe calls for 1/2 cup lime and 1/4 cup grapefruit and no orange. I couldn’t squeeze a half cup out of my 2 limes)
1 clove garlic diced (original recipe calls for 3. I only had one, plus my husband isn’t a huge fan)
1 tsp oregano
1/2 tsp salt
1/2 tsp cumin
1/4 tsp black pepper
2 bay leaves
3# boneless pork roast (mine was only 2.5lbs)
1 large sliced onion
1) For marinade, combine lime juice, water, grapefruit juice, orange juice garlic, oregano, salt, cumin, pepper, and bay leaves in a medium bowl. Pierce meat in several places and place in crock pot (I did a zip-top bag for better marinade coverage). Pour marinade over meat. Cover pot with stretch wrap and chill in the refrigerator for 6 + hours, turning occasionally (I didn’t turn, because I wasn’t going to get up during the night to do it. This is why I chose to do it in a zip-top bag).

2) Remove from fridge and top with sliced onion.

5) Add onions and enough juices to make it your choice consistency or serve juices on the side (I mixed them in).

Verdict: Not bad. I was a little disappointed by the lack of flavor. I couldn’t really pick up the citrus, or the cumin for that matter. I think I would add more cumin and oregano next time and maybe throw in some citrus peels to really infuse the flavor. Overall, not a bad pulled pork recipe. Super easy which is a plus.
Husband’s take: He liked it, but liked the bourbon mango pulled pork better. I agree. However, this one was easier/less work. He aslso liked the sandwiches I made with the leftovers better than the original recipe. I agree again. I’ll talk about the sandwiches next time.
Changes I would make: See “verdict.”
Difficulty: Easy
Served with: Sliced beets (can you believe my husband actually eats them?) and wild rice topped with toasted almonds. 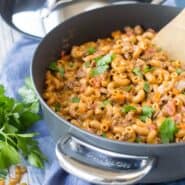 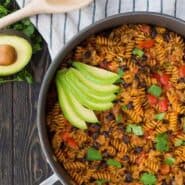 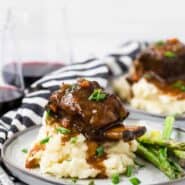