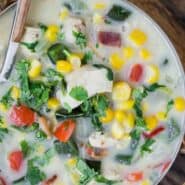 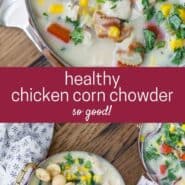 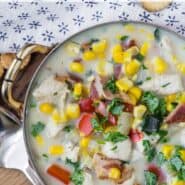 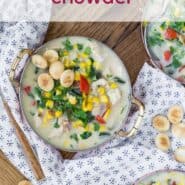 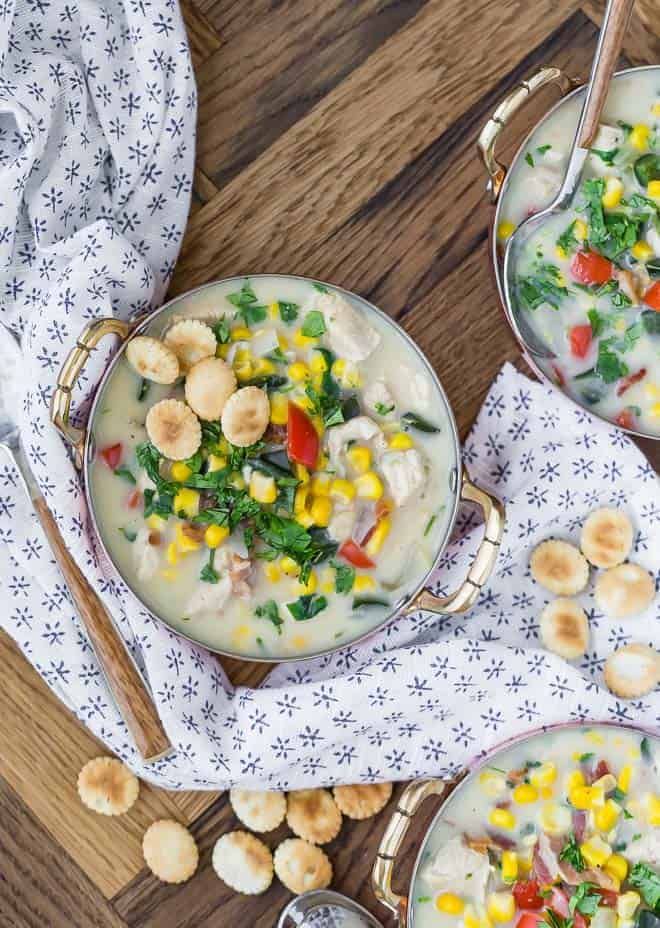 And it is beautiful, isn’t it? Bright green cilantro, deep green poblano, scarlet red bell peppers, brilliant yellow corn, floating dreamily on a creamy background, provide a feast for the eyes, and of course, lots of nutrition, too.

Right now, take advantage of the abundance of sweet corn that farm markets are offering. Make this chowder with freshly cut corn kernels for a really special treat. But don’t worry, frozen or canned corn are great substitutes.

You’re going to love this chicken corn chowder. It’s hearty and fresh tasting. With lots of texture, taste, and creaminess, this chowder hits all the sweet spots. In fact, make a double batch. You’re going to want it again tomorrow. (And it reheats beautifully.) 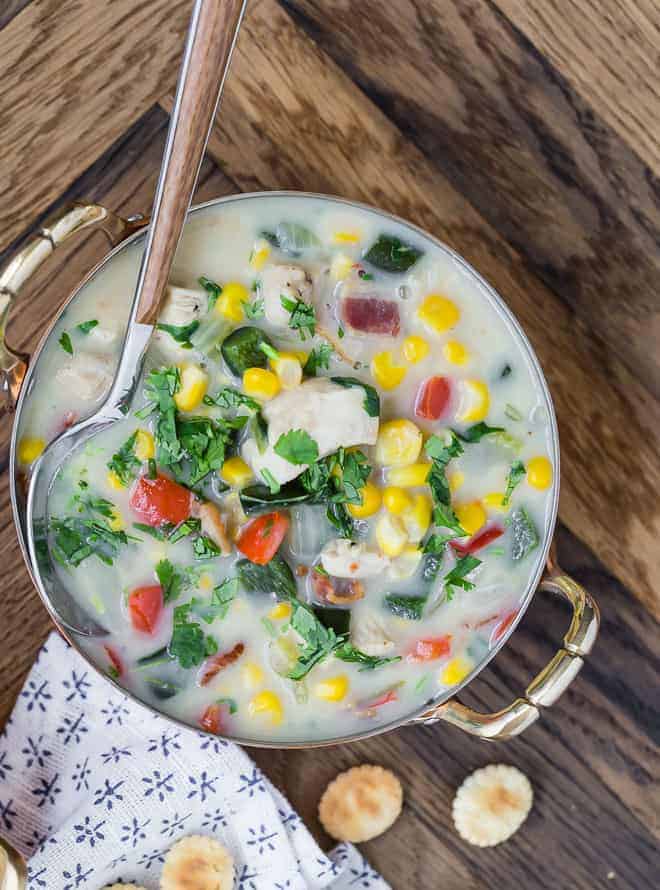 About this chicken corn chowder:

This recipe for chowder strays a little from a traditional chowder. No seafood or potatoes in chicken corn chowder!  You may find it appeals to a wider audience because it’s not a heavy soup, and the veggies provide so much fresh flavor. It isn’t loaded with cream and cheese so this chowder is good for you, too.

Bacon. Bacon seems to find its way into my recipes on a frequent basis. It just adds so much flavor. Start this chowder by sautéing bacon until it’s nice and crispy. Set aside the bacon to add later, and reserve the grease.

Next in the pot with the bacon grease goes cubed chicken breast, onions, celery, red bell pepper, and poblano pepper. Sauté until the veggies are softened. So far, so good, right?

This chowder is thickened with a roux.

What is a roux? Simply flour and fat cooked together to thicken sauces, soups, etc.

The fat is already in the pot so add a fourth cup of all-purpose flour. Stir and cook for a couple of minutes. The flour will coat the chicken and vegetables. That’s okay.

Next up is chicken broth. Slowly stir a couple cups of broth into the soup. Add a few cups of corn and let the soup simmer for about 15 minutes.

We’re almost there now. Add a cup and a half of milk, crumbled bacon, and lots of fresh cilantro. Stir until heated and you’re ready to serve your chowder. Total cook time? Right around 30 minutes. Not bad, right?

Time saving tip: Chop the onions, celery, bell pepper, and poblano the night before and put them in a zip top bag in the fridge.

Serve chicken corn chowder with crackers or cornbread muffins. Fresh fruit or a green salad would be perfect accompaniments. 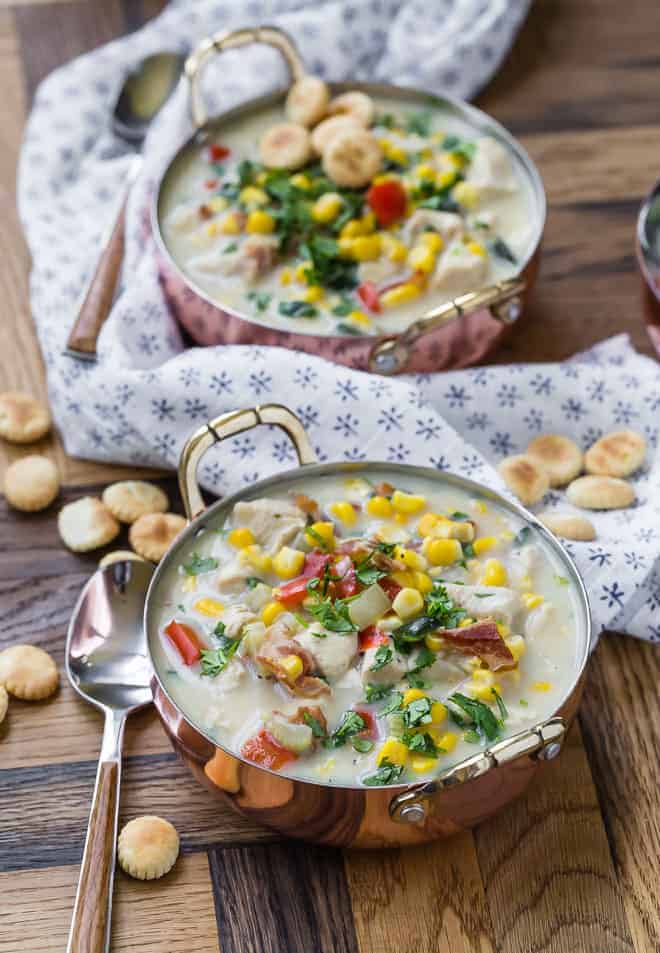 What makes something a chowder?

First, a little history: Chowder was originally a shipboard soup. Early ocean travelers were served a simple soup of potatoes, onions, salt pork or fish, probably thickened with crumbled hardtack, a cracker-like bread that keeps forever. All of the ingredients could be stored a long period of time without refrigeration, except the fish, which was freshly caught. Early New Englanders continued serving this nutritious and easy meal.

Today’s chowders are usually made with seafood, potatoes, onions, and sweet corn. Often chowders are thickened with a roux, and milk is added to give the soup a creamy consistency. Chowder is usually served with crackers, which can be crumbled into the chowder, if desired.

What’s the difference between a chowder and a bisque?

While chowder and bisque are both creamy soups, the main difference is that a bisque is puréed or blended until it’s smooth. A chowder is thick with lots of chunky vegetables and meat. 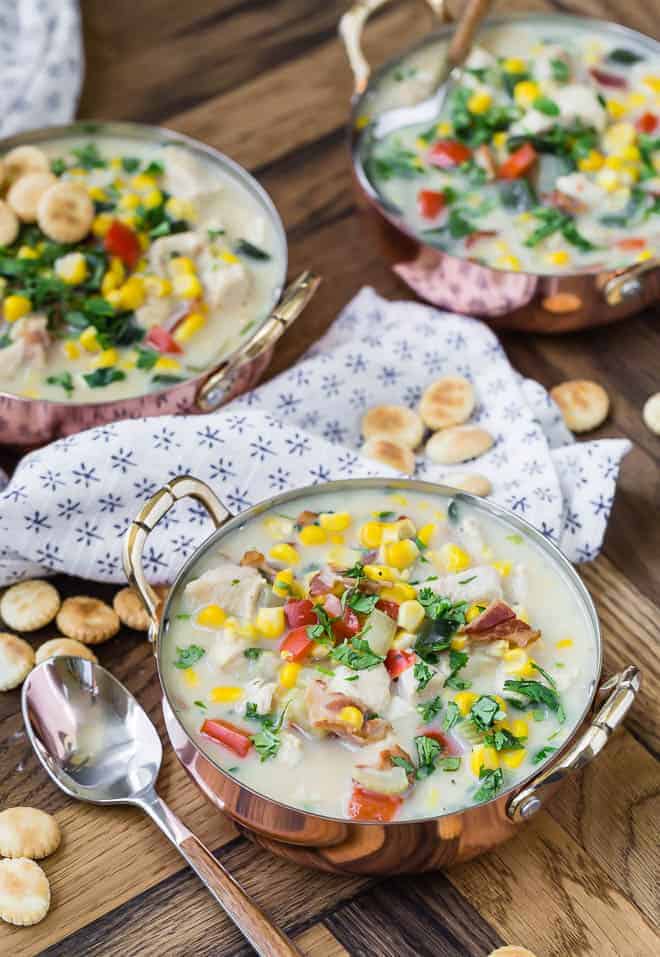 Use this recipe as a base and make substitutions as you like. Here a few suggestions: 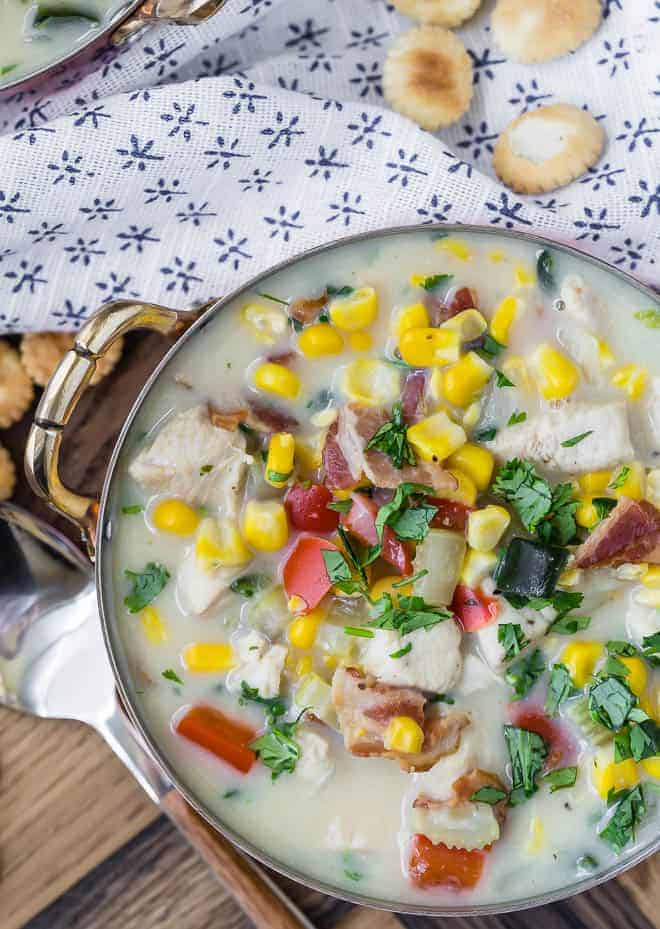 Leftover chicken corn chowder can be stored in a covered container in the fridge for three or four days. Reheat gently on the stove or microwave.

Make ahead tip: Prepare the soup as directed, except don’t add the milk and fresh cilantro. Slightly undercook the vegetables. Cool completely and freeze for up to 3 months in freezer containers. Thaw overnight in the fridge and reheat on the stove. When soup has heated, stir in milk and cilantro. Note: If you’ve added potatoes, don’t freeze the soup because potatoes get mushy when frozen.

Make the most of summer produce by enjoying one of these delicious soups. Try:

Verdict: So hearty and comforting without being heavy. I love this soup!
Husband’s take: Ben is a fan of anything with bacon.
Changes I would make: None!
Difficulty: Easy!
Main Dish One Pan Poultry Soups and Stews 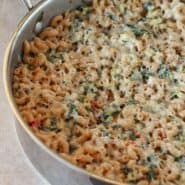 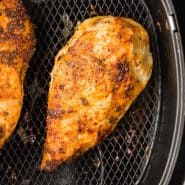