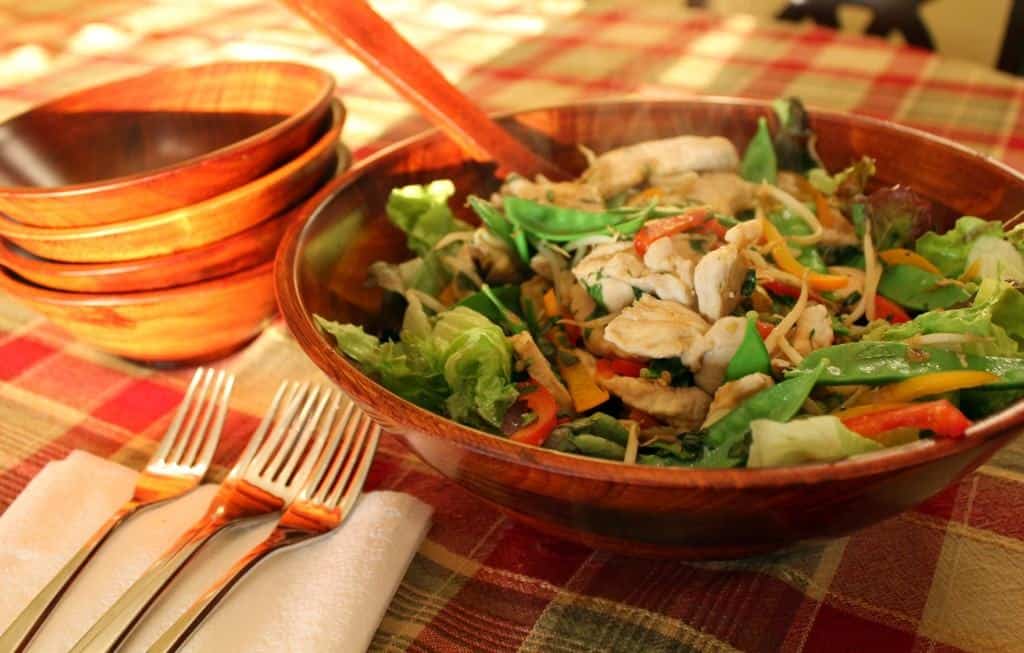 So…here I go again changing Emeril’s recipes. I do not think I am a better or more knowledgeable chef than Emeril Lagasse. In fact, that idea is laughable. I just know what my husband and I like. This is the fifth installment of the Emeril series–here are parts 1, 2, 3 and 4.

This recipe started off as Wok-Seared Duck Salad. It’s from Emeril’s new cookbook Sizzling Skillets and Other One Pot Wonders. First problem: I don’t have a wok–but I do have plenty of large frying pans. Second problem: Hubs doesn’t like duck. Third problem: It has a Thai bird chile in it and fish sauce and both of those ingredients scare me. Go ahead and judge me. I’m all about transparency–just telling you like it is.

But did I toss the recipe out and say forget it? No way! Especially since this was one of the select few recipes I am allowed to share with you. In fact, it is even better for you because you get two recipes for the price of one! (Free.) I would just give you his recipe and tell you what I did to “tweak” it, but I’m not going to lie…my version is almost unrecognizable. Sorry Emeril. Let’s just say you inspired me. You did! (I’m assuming he is reading this…ha!)

I also added veggies. Are you surprised? I added orange bell peppers and snow peas. 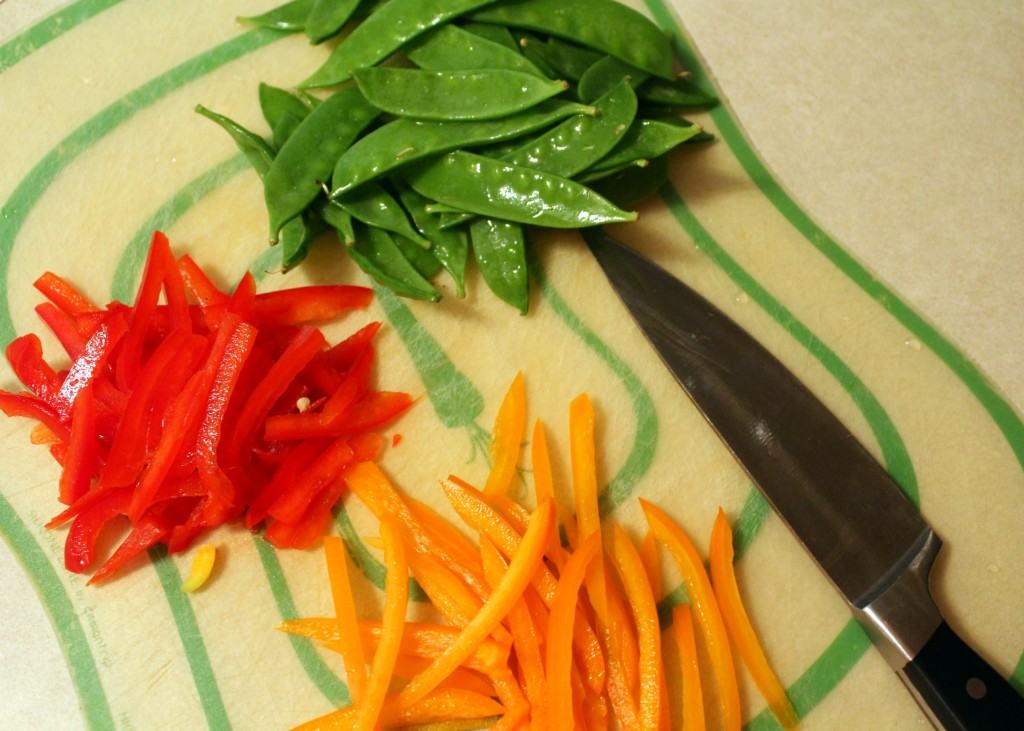 It already had bean sprouts, red leaf lettuce and tons of fresh herbs. I gave the herbs a quick mince, but I believe Emeril leaves them whole in his recipe. Do whatever you prefer–I like the smaller pieces running throughout the salad. They actually kind of adhered to the pork slices–delicious! 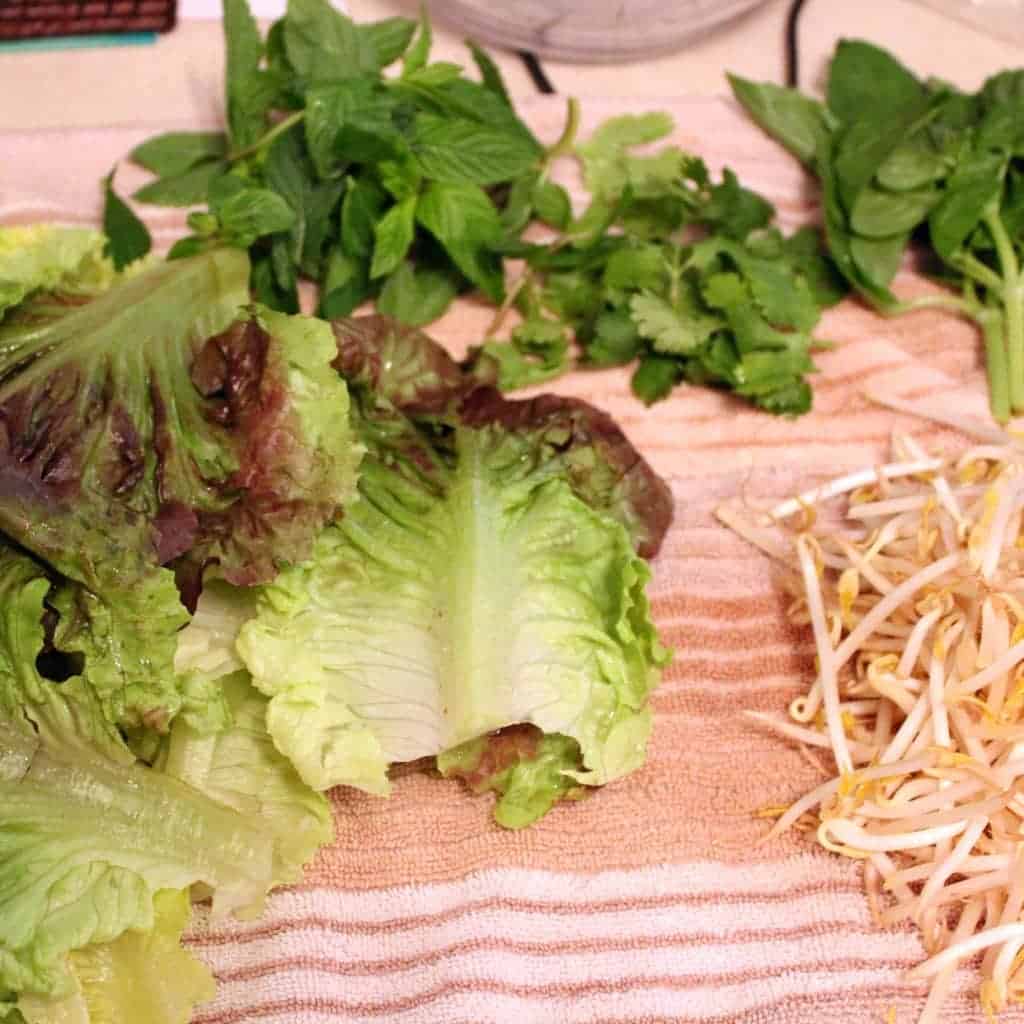 1. Heat a wok over medium-high heat and add the rice. Toast the rice, shaking the wok constantly, until all the grains have turned golden brown, 3 to 4 minutes. Transfer the rice to a mortar and set aside to cool. Once the rice has cooled, grind it using a pestle until it reaches a sandy consistency. Alternatively, grind the toasted rice in a clean spice grinder. Place the rice in a large mixing bowl and set aside.
2. Place the chile in the wok over medium-high heat and cook, shaking the wok, until lightly colored and fragrant, 30 to 60 seconds. Remove the chile from the pan and add to the bowl with the rice.
3. Using a paring knife, score the fatty side of the duck breasts by making shallow cuts in a diamond pattern; this allows the fat to render more easily. Place the duck breasts in the wok, fatty side down, and cook over medium heat until the skin is golden brown and slightly crisp, 4 to 5 minutes. Transfer the duck breasts to a cutting board, slice them into thin strips, and return the strips to the wok. Add the shallot and ginger and stir-fry over medium-high heat until the duck is just cooked through, about 2 minutes. Transfer the duck from the wok to the bowl with the rice and chile and set aside.
4. In a small bowl, combine the fish sauce, lime juice, orange juice, and palm sugar and mix well. Pour the mixture over the duck and toss until well coated. Add the cilantro, mint, basil, lettuce, bean sprouts, and julienned red pepper and toss to combine.
5. Serve the salad immediately. 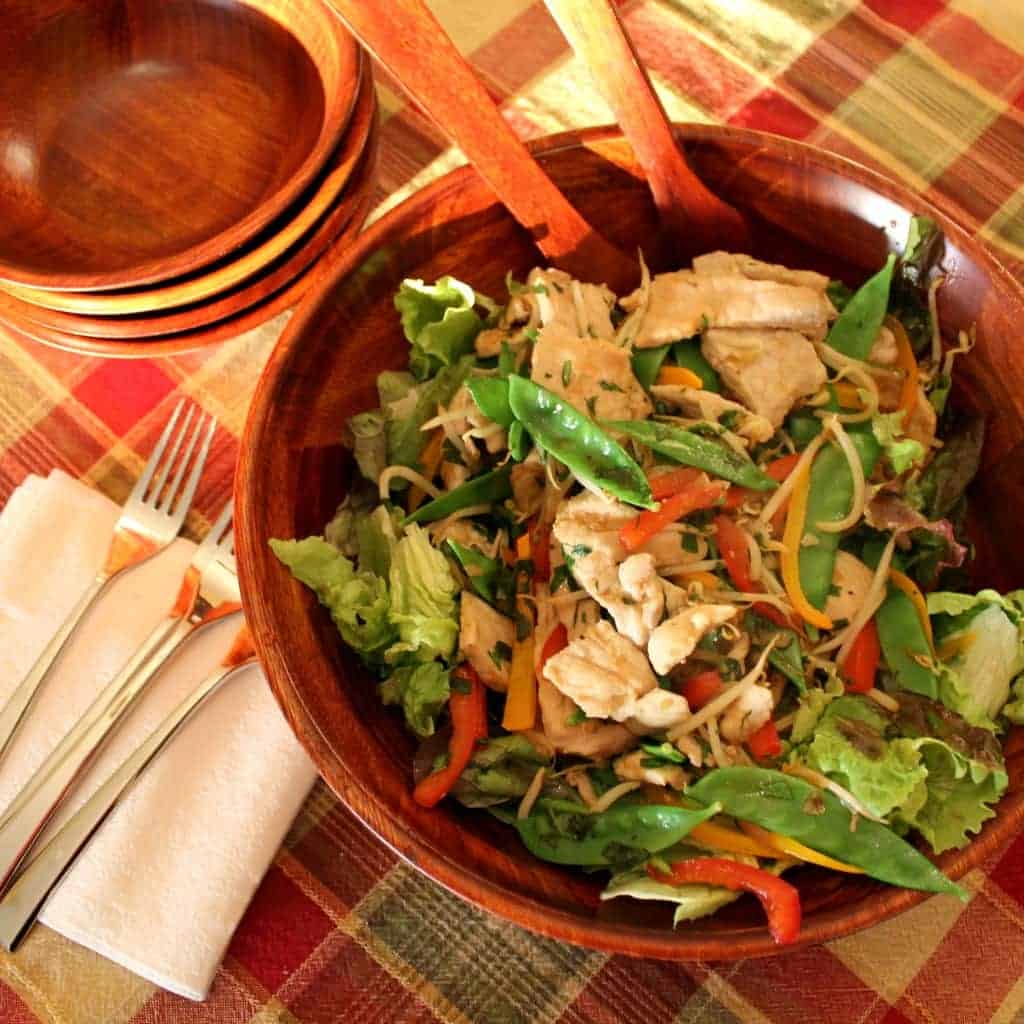 1. Using a sharp knife slice the pork chops into thin strips, and place in a frying pan with 1 Tbsp olive oil, heated over medium-high heat. Add the shallot and ginger and stir-fry over medium-high heat until the pork is just cooked through.
4. In a small bowl, combine the fish sauce, lime juice, orange juice, and palm sugar and mix well. Pour the mixture over the pork and toss until well coated. Add the cilantro, mint, basil, lettuce, bean sprouts, and julienned red pepper and toss to combine–I stir-fried this whole mix for about 2 minutes to get the veggies softened up a little bit. That is completely optional.
5. Pour this mixture over the lettuce and serve immediately. 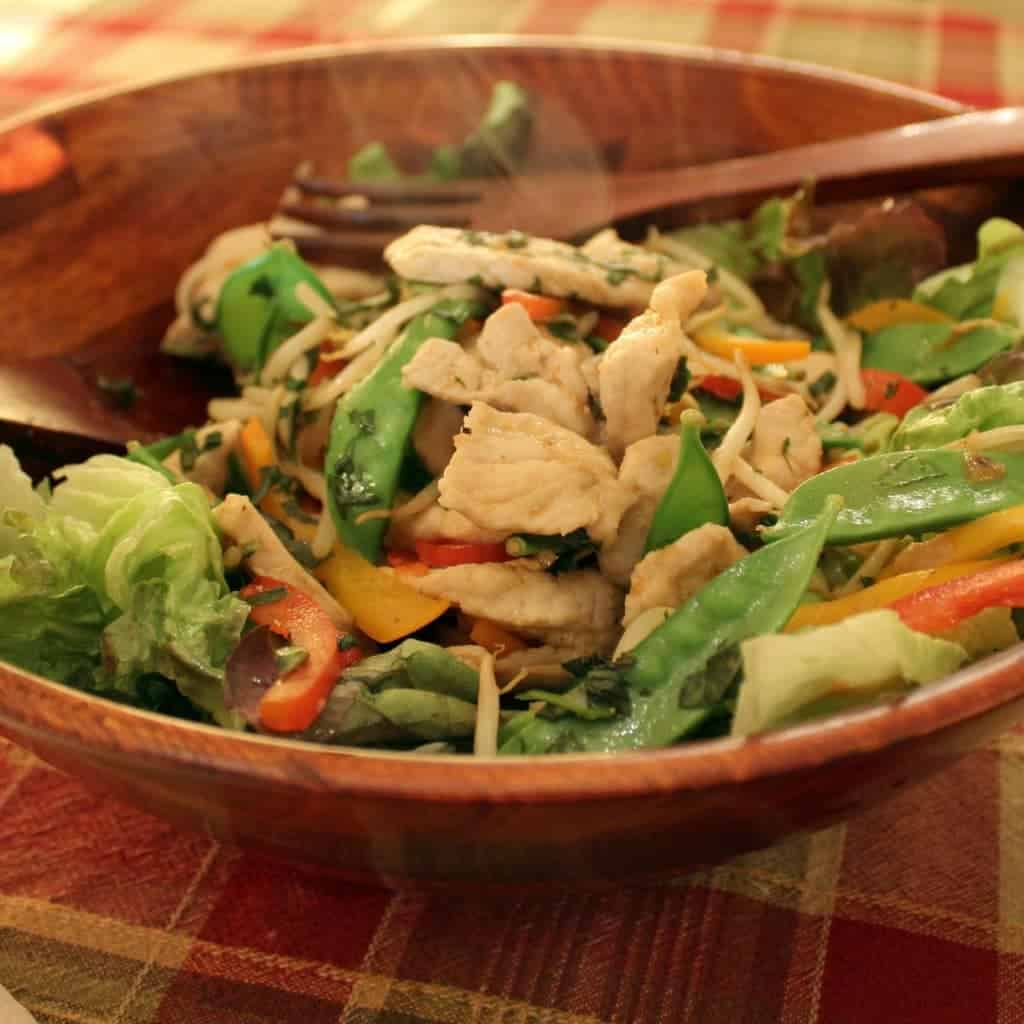 Verdict:  At first I was skeptical, but I ended up really enjoying this salad. My version was kind of half stir-fry, half salad. I loved all the fresh flavors of the herbs and the vegetables. The mild flavor of the pork soaked up the dressing and was really delicious. I loved how I felt satisfied after this meal but I didn’t have that heavy, over-full feeling you get after eating…say a pizza dinner.
Husband’s take:  I told a white lie and told him this was a stir-fry (he says eating salad for dinner isn’t manly). I guess it isn’t really a lie–it was a stir-fry, it was just served over lettuce instead of rice. Long story short, he loved this. He went back for seconds, and I think even maybe thirds.
Changes I would make:  I might go a little lighter on the dressing–there was a lot sitting at the bottom of the bowl.
Difficulty: Easy!

Also, we have a winner for the Zak! giveaway–check and see if it is you!

Full disclosure: For my commitment to this blogger cooking party, I received a copy of this cookbook, as well as a set of Emeril – by zak! Table Art 7-piece Flame-Shaped Serving Bowls, and Emeril Seasoning; a $50 grocery reimbursement and Emeril cookbooks upon completion of the party. The top performing blogger, as selected by T-Fal, will be awarded an Emeril by T-Fal Slow Cooker. You will be eligible to win a copy of the cookbook, as well as the 7-piece zak! set (stick around to hear more about those two things). All opinions about the book and recipes, as always, are my own. 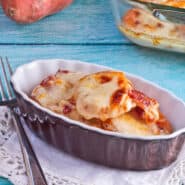 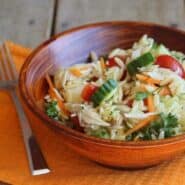 Orzo Salad with Chicken and Vegetables 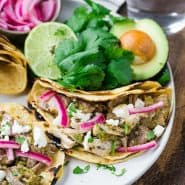