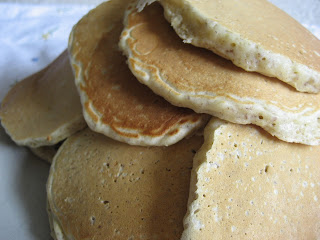 I’m a big breakfast person. Well, I am now that I am a stay at home mom. I usually have two eggs, toast, fruit, juice and coffee. I’ll probably switch to egg whites (or at least 1 of each) when I’m done nursing and have to watch my calories more closely. Sometimes I’ll have oatmeal with ground flax, dried cranberries, fresh or frozen blueberries and toasted walnuts. So yummy. Lately I’ve been on an egg kick though. It is important for me to eat a big breakfast because sometimes I don’t get a chance to eat lunch until about 3pm. So when I came across this recipe, I tore it out because I knew it would be a good way to add protein to my breakfast. Also, it came with freezing instructions, helpful for hubby to grab as he is running out the door in the morning. My mom came to visit and made a version of these, and they were really good! I stuck a little closer to the recipe than she did. 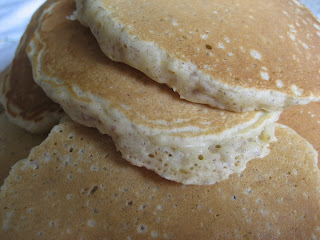 1) In medium bowl, whisk together quinoa, flour, baking powder, and salt. In another medium bowl, whisk together egg, egg white, butter, milk, and syrup until smooth. Add egg mixture to flour mixture and whisk to combine.
2) Lightly coat a large nonstick skillet or griddle with butter and heat over medium-high (I did medium). Drop by heaping tablespoonfuls (I used a 1/4 cup measuring cup) into skillet. Cook until bubbles appear on top, 2 minutes. Flip cakes and cook until golden brown on underside, 2 minutes. Wipe skillet clean and repeat with more melted butter and remaining batter (I skipped the wiping and skipped adding more butter–I was using a nonstick skillet. I’m sure the butter would have made it taste better, but it wasn’t necessary with the type of pan I was using). Serve with maple syrup and fresh fruit or preserves if desired. Makes about 12. (I doubled the entire recipe because I wanted to freeze some).

Freezing directions: Freeze cakes between sheets of waxed paper in sip-top bags, up to 1 month. Reheat in toaster. 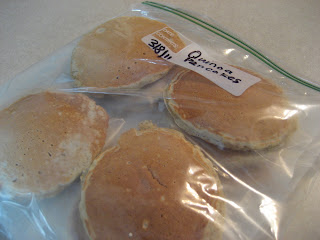 Verdict: These are really, really good. They are different from your typical pancake because there is a little bit of a crunch from the quinoa. The pure maple syrup gives the pancakes a really nice flavor. I wasn’t sure how reheating them in the toaster would go, I was thinking that maybe the microwave would be better. However, I heated three of these in my toaster oven this morning, and wow! It was like they were fresh off the skillet because they were crispy on the outside and soft on the inside. Delicious.
Husband’s take: He used the toaster oven for these and he really liked them. However, he just told me “I prefer IHOP with chocolate chips and strawberries and whipped cream.” That’s my healthy hubby! No really, he is a bit of a health nut. When he wants to be. Aren’t we all?
Changes I would make: Next time I make these I’m going to try them with whole wheat flour, or maybe half whole wheat and half all purpose.
Difficulty: Easy. Just make sure you remember to make the quinoa in advance.