I’m not a super huge fan of leftovers. Part of me loves them, because I don’t have to cook that night. I love to cook, but it is always nice to have a night off! However, I am easily bored by eating the same thing two nights in a row. I like to do something to my leftovers to make them slightly different. For example, if one night I make a pork roast, the next day we might have pulled pork sandwiches. If I have leftover chicken, we might have stir-fry, quesadillas, or chicken salad. The possibilities are endless with chicken. What are your thoughts on leftovers? Love ’em? Hate ’em?

This is what I did with my leftover taco ingredients. This remix also solved the fact that I was out of lettuce. 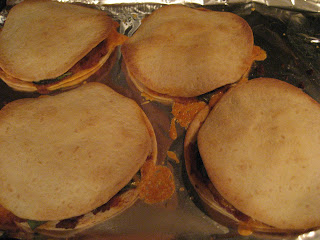 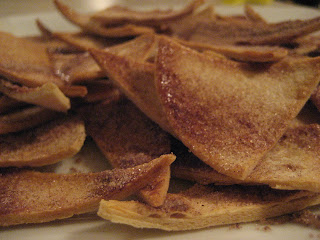 Line two baking sheets with foil for easy clean up. On one sheet, lay out tortillas (the number depends on how many quesadillas you want. I did four). Spread with refried beans, top with ground meat, add a layer of spinach and top with cheese. Place a second tortilla on the top of each stack.

Cut remaining tortillas into wedges. Arrange in a single layer on second foil-lined baking sheet. The single layer thing is a pain, but it is very important. Lightly spray tops of tortilla wedges with non-stick spray and sprinkle on cinnamon sugar mixture.

Place both pans in oven preheated to  375*. Watch closely, as once they get going, they go quickly. I think mine took about fifteen minutes, but I really have no idea. At one point, I actually put the cinnamon crisp pan right on top of the other pan for two reasons. 1) To press down the quesadillas, and 2) because I wanted to turn the broiler on for a minute to melt the sugar on top of the crisps.

For the quesadillas, you want the edges to be crispy and the cheese to be melted. You could make these whichever way you prefer to make quesadillas–grill pan, frying pan, quesadilla maker if you’re a gadget lover. I choose the oven because it is easy, and you don’t have to flip the thing. I’m not good at flipping things. Top with any toppings you like. We had diced tomatoes and guacamole. Sour cream would of course be good.

For the cinnamon crisps, you want them to be crispy and the sugar to be melted and stuck to the tortilla.

Husband’s take: He liked them. Hubby isn’t too picky.

Changes you could make: I really like my quesadillas with some grilled peppers and onions and even some corn. The corn gives a nice textural bite. I think the cinnamon crisps would be amazing dipped in cream cheese frosting.
Difficulty:Can’t get much easier. 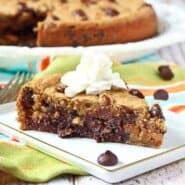 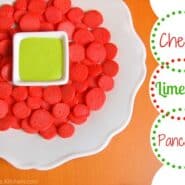